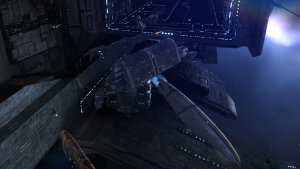 The Caldari Industrial “Badger” in front of Jita 4-4

As mentioned in the  earlier post, I wasn’t really happy with the local supply of ammunition for my Drake. On top of that, I noticed that there was quite a bit of traffic of other missile boats at the station I was missioning at that time. So there were plenty of other capsuleers who were standing for the same problem. A situation which opened a market opportunity. On top of that, there were also a lot of miners in the system. So it was a possibility that I could directly buy minerals in the local system using buy orders. So I took the situation as a reason to try out the basic industry part of the game.

As with a lot of things in EvE, doing research is the first step to success. I needed to know how I can produce my heavy missiles and if I can do it without losing money in the manufacturing process. Again, the EvE University Wiki proved to be a good source of knowledge with their articles about Researching and Manufacturing. The basics steps needed to get from nothing to a finished T1-product at a competitive price level are:

The basic needed skills are fairly minimal. For researching, we are looking at Laboratory Operation I (which requires Science III). For manufacturing, you only need Industry I, theoretically. In practice, there is also the skill “Production Efficiency”, which also reduces amount of materials needed for production. As there are a lot of people out there you have to compete with, I think Production Efficiency IV is pretty much required in order to be competitive on the market, which also requires Industry III. And even then, you may want to avoid the major trade hubs for a lot of items, because the price competition might be too hard. There might be additional skill requirements, depending on the BPO.

So, I started with the most basic a Drake would regularly need: Scourge Heave Missiles. The Uni-Wiki has some basic guidelines on how much research is needed for a BPO-type, but it doesn’t hurt to look at each BPO on its own, does it? For that, there is a very nice and simple website: http://zofu.no-ip.de/bpo. First, the site tells us, that this particular blueprint is seeded on Caldari Navy and Republic Fleet stations, as well as the base price. So the initial investment in the BPO is 750k ISK. The site also tells us, that the maximal material research level is 147 and time research level is 60. With less than 2 weeks research time needed, theses levels seems to be a good investment, as perfectly researched BPOs can sell for a good amount of money on contract. Next up is the question, if one can manufacture the item at a competitive price. Since I only have Production Efficiency IV, I’ll also need to calculate the required materials first. Some serious business incoming: 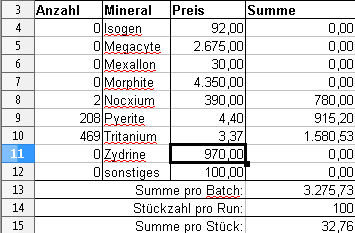 Spreadsheets! Kind of needed if you need to handle EvE math together with market prices for different items etc. The needed equatations can be found at http://wiki.eve-id.net/Equations. So, for example, the perfect researched BPO needs 738 Tritanium per run. But with Production Efficiency IV, there will be some waste. So, the actually needed amount of Tritanium is:

So, in the end, I needed 775 Tritanium and 2 Nocxium for 100 Missiles. At the current buy order prices, it would end up at around 34,26 ISK per missile, not including the cost for the manufacturing slot. So, let’s say we produce 10000 missiles (= 100 runs), this would take 400 minutes. At 1k ISK install cost and 333 ISK per hour rent (yes, you can find NPC-stations with these prices), we are looking at a whooping 0,322 ISK per missile. So, the factory throws out each missile for 34,582 ISK. As I write this post, the current sell price for the Scourge Heavy Missile in Jita is 42,95 ISK. So even with Production Efficiency IV, this would be a competitive price. And you can go higher with the price outside of this trade hub. It is also possible to drop the manufacturing price by producing missiles more per job, because the installation cost is a one time fee. At 100k missiles, I would end up at 34,492 ISK.

Armed with this rudimentary business plan, I ventured out to start my research… and then I found out, that the material efficiency research slots in highsec are always filled for at least 20 days – usually longer. I was not interested in waiting that long, but I could see in the installation overview that the queues in the lowsec stations in my current region were shorter. So I equipped a Rifter with a cheap T1-fitting, plotted a route through various regions through lowsec and NPC nullsec and started to venture out in order to find a station with a short material research queue. What could possibly go wrong? The Rifter was cheap and expendable, and my BPO investment was only at 750k ISK, which wasn’t that much either. So losses were acceptable.

I got immediately distracted by a DED deadspace complex thingy in the very first system I jumped in. Thinking I could take a look at it, I found a Hurricane at the gate. Oh hai! I knew that a BC wouldn’t be able to get into that Level 2 DED complex, so I immediately hit the gate. Inside I tried to get an overview and started to shoot the first rats, as a Jaguar appeared in the pocket, targeted me and let my Rifter explode in a fireball. Well that much for my first PvP experience. Got the pod out, got it into a second Rifter and was back on my planned route for finding a suitable station for my research plans. I eventually find one in NPC-Nullsec with a waiting queue of only two days. So I flew to highsec, got my freshly bought BPO, flew back and installed it in a research slot at the station. When I flew back, I learned about Mobile Warp Disruptor bubble thingies and Arty-Rapiers just one jump before lowsec. This ended in another exploding Rifter and a broken pod. From that moment on, I decided to use Shuttles for traveling into nullsec for as long as cloaked frigates were out of reach (read: not enough skill points). Up until today, I lost two Shuttles and another pod. And I was also ransomed once in a shuttle – the pirate let me go after paying, so a shoutout to him (forgot the name). However, I’ve never lost any blueprints in the process – got kind of lucky, I guess.

So, eventually, I got that first fully researched blueprint back in highsec. My first minerals came from refining some mission loot. After filling a manufacturing slot in a station and waiting a bit, I got my first 20000 self produced missiles. I kept half for myself and put the other half on sale order in my then current mission hub – with a good markup over the Jita price. Half an hour later, they were sold.

I started to expand from that point. There was a substantial time investment before getting the first finished products, but from that moment on, it was just installing manufacturing jobs and handling materials. I started to research more BPOs and reinvested my earnings bit by bit. Although the market prices are always shifting around, I always made a profit until now. This little “How does missile production work?”-experiment turned out to be the base for my current primary source of income in the game. I’ve never expected that.